LGB first formed Sri Bestari Private School (known as ‘Sekolah Sri Bestari’) in 1995 which has been championing excellence in the national education sector. In 2017, the company decided to open its international school division which would carry the British IGCSE curriculum to provide an alternative option to its township as well as surrounding areas.

At SBIS’s helm is its Principal, Dr Wong Siew Chin; a mother and an educator with 17 years of experience in the International School arena. Backed by a strong team of diverse and talented educators, as well as staff who are all highly committed to ensuring that SBIS develop young leaders who embrace growth, grow in confidence and are determined in making a difference. 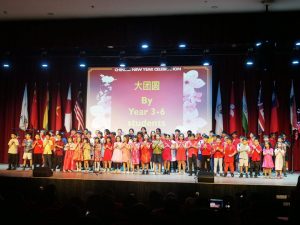 At the moment, LGB itself has an ongoing development within the Sri Damansara area and have plans to expand on their current developments in Ampang and Senawang as well as a new development called Aria Rimba in Shah Alam.

With its ground-breaking ceremony held in 2018, a year and a half later the International School Campus now homes up to over 50 classrooms, 8 studios covering Music & Arts categories, an indoor and outdoor playground, 10 fully equipped labs for all subjects in the Sciences, ICT and Culinary labs, a football field, a basketball court, a tennis court, a 25-meter swimming pool, an indoor multipurpose and sports hall as well as an auditorium with a capacity of 420pax; the school is strategically located and built on 15 acres of land, providing an ever-growing number of students with a conducive learning environment that not only promotes green living but one of active lifestyle.

SBIS offers the National UK curriculum for early years to year 9 and Cambridge IGCSE curriculum for Year 10 and 11. In keeping with an optimal level of teaching and a conducive learning environment, each class does not exceed 25 students. Students cover a host of subjects in Speech and Drama, English, Maths, Science, ICT, Physical Education, Music, Global Perspectives, Arts and Design, foreign languages, Mandarin Language. Mandarin is compulsory. Using our virtual learning environment known as Schoology, teachers and tutors communicate with students and their parents concerning lessons, worksheets, notes and school projects. A “Tutor-Ward” whereby each child will have a tutor (‘guardian’) in school, which is the first contact point to further monitor the child’s overall progression, well-being and mental growth.

The pursuit of excellence goes beyond academics.

Over the last 20 years, the schools’ academic teams have continuously developed and enhanced a series of platforms that encourage students to grow academically, socially and emotionally. The focus of building oneself through G.R.I.T. (Gratitude, Resilient, Intentional Inconvenience and Teamwork) has always been at the core of Bestarians; that highly pride themselves as all-rounded and confident individuals prepared to take on the future.

Encapsulating the motto of ‘My Growth Mindset Begins Here!”, platforms such as My Little Author, Tag Talks, M.A.D. Together Initiatives are in place to encourage students in their creative abilities and entrepreneurial skills. Students are exposed to various experiences in hopes to inspire and enable them to try their hand in areas they may be show interest in. For example, through our My Little Author module, the students have met with Author and Illustrator; Ms Lim Lay Koon to learn writing processes such as character building, plot devising and illustrating. As part of the M.A.D. (Making A Difference) Together Initiative – students have learnt to raise funds for various outreach programmes through planned projects and events such as the M.A.D. Art Auction and the M.A.D. Boutique, which is managed by the students with the supervision and assistance of faculty members.

Various young entrepreneurs such as William Sin the Director of Hallmark Jewellery, Josh Teng the Founder of The Next Academy and Derek Cheong – the Master Franchisee of Xing Fu Tang have come to give talks via the Tag Talk platform. In sharing their success stories and experiences throughout their careers, the talks and discussions are hoped to inspire students to act on subjects they are passionate about. Such as the attempt by one of the senior students when she participated in the Malaysian Comikers Challenge. It is SBIS’s strong belief that students grow and cope better when there is support and acknowledgement of their achievements, no matter the capacity. The Chinese New Year celebrations was the first event where students, members of the SBIS’s Mandarin Society and SBIS’s Chinese Drum Club performed in its new auditorium. Sri Bestari International School, home to proud Bestarians and their families – wish all Malaysians a very Happy Chinese Lunar New Year and Happy Holidays! May the year ahead bring us all peace, health and happiness!

For further enquiries about the school’s next intake, please feel free to contact the school’s Admissions and Marketing department at 03-6263 9923 ext. 201/209 or email the school at [email protected] It is more than just Property Development

Striving Towards A Common Goal