VIRANDEEP Singh marked Malaysia’s return to international cricket after more than a year’s absence with his highest individual T20I score but it was not enough to prevent the Netherlands from winning by 15 runs at the Bajaj Pulsar Tri-Nations T20I Series in Kirtipur, Nepal on Sunday. 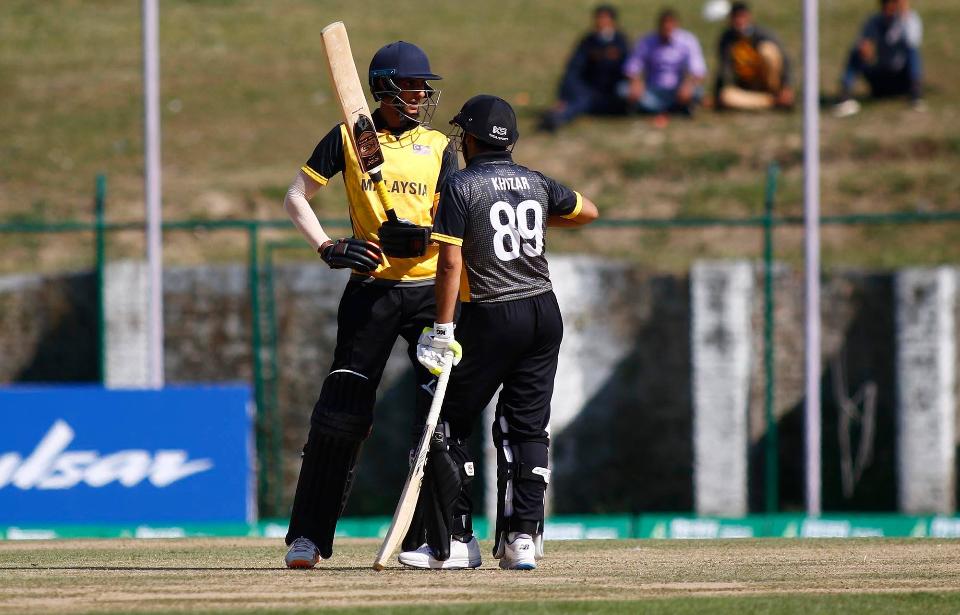 Max O’Dowd carried his bat to become the first Dutch player to score a T20I century as the Netherlands posted 191 for two at the Tribhuvan University International Cricket Ground before Malaysia reached 176 for eight in reply.

Virandeep kept the outcome in doubt until the penultimate over as he compiled 87 runs – the joint-highest by a Malaysian batsman in T20Is – from 53 balls, including six sixes and six fours.

It was a fine effort by Virandeep in Malaysia’s first taste of international action since a six-wicket defeat to Hong Kong at the Asia Cup Eastern Region qualifiers on Mar 6, 2020 in Bangkok.

An under-strength Netherlands, who have qualified for the T20 World Cup in India later this year but left out several first-choice players for the Tri-Nations Series, lost by nine wickets to Nepal in the tournament opener on Saturday.

On paper, it should have been a mismatch with the Dutch 18th in the ICC T20I men’s team rankings and Malaysia in 31st spot but Virandeep’s heroics ensured the limited crowd in attendance were kept on tenterhooks until the end.

The Netherlands won the toss and chose to bat with the first ball bowled by Malaysia in over 13 months by Pavandeep Singh hit by man-of-the-match O’Dowd through cover for the boundary.

The rustiness from a long layoff showed in Syed Aziz Syed Mubarak, whose first two deliveries were not only wides but was also punished by O’Dowd for successive boundaries in an over which cost 12 runs.

It was left to Pavandeep to make the breakthrough, the spinner finding the middle stump with his first delivery of the third over to send Tobias Visee back.

Scott Edwards clubbed the first six of the innings at the end of the seventh over after advancing down the wicket to hit Khizar Hayat Durrani over cow-corner and take the Dutch to 56-1.

However, Anwar Rahman snapped a promising 49-run second-wicket partnership between Edwards and O’Dowd by trapping the former leg-before, Edwards exiting after scoring 31 runs off 23 balls with three fours and a six.

O’Dowd reached his fifty off 37 balls by smashing a six and a four in the space of three deliveries off Anwar Rahman before going 6-4-4 in the next over to plunder 17 runs from Wafiq Irfan Zarbani.

He took just 22 balls more to reach his century with a four off Syed Aziz, who was then hit for three consecutive fours as O’Dowd remained unbeaten on 133 after slamming six sixes and 15 fours.

Malaysia had never successfully chased a target of 192 before, with their highest successful run chase in T20Is being 172 runs against Hong Kong in February 2020.

Their reply started well but Malaysia then lost two wickets in the opening over when Anwar Arudin, having smashed a six, was bowled by Aryan Dutt before captain Ahmad Faiz Mohammed Noor’s attempted sweep only succeeded in gloving it to wicketkeeper Edwards, with 12 runs already on the board.

Malaysia slipped to 20-3 when Syed Aziz got a leading edge off Bas de Leede for a simple catch at cover but Virandeep got the chase going with a boundary followed by two consecutive sixes in the fifth over and Sharvin Muniandy with three straight boundaries the next over.

Another six by Sharvin took Malaysia to 68-3 and past the required run-rate after seven overs before a single by Sharvin completed a half-century for the partnership.

But Philippe Boissevain tempted Sharvin (28) with a short ball and was caught at long-on after hitting four fours and a six off 20 balls, thus ending a record 58-run stand in T20Is for the fourth wicket with Virandeep.

Shafiq Sharif followed Sharvin back in the next over, also caught at long-on by a forward diving Ben Cooper, as Malaysia was reduced to 79-5.

That was the cue for Aminuddin Ramly to hit a brisk 26 off 14 balls, including two fours and two sixes, before he was dismissed by de Leede going for another six towards backward square leg.

Virandeep reached his third T20I fifty from 39 balls with a four off Sebastiaan Braat, who then claimed the wicket of Khizar to leave Malaysia needing 57 runs from the last four overs with three wickets in hand.

Virandeep hit two straight boundaries off Boissevain to move past his previous highest T20I score of 57 against Nepal in July 2019 as he single-handedly kept Malaysia’s hopes of victory flickering.

Needing 37 runs from the last 12 balls, Virandeep smashed two sixes in a row off Braat before equalling Syed Aziz for Malaysia’s highest individual score of 87 runs in a T20I. The next ball, however, saw Virandeep depart when he miscued a slower Braat delivery to deep extra cover.

With 23 runs required from eight balls, it was down to the tailenders to get the job done but the task was beyond them.

Malaysia plays hosts Nepal on Monday in a repeat of their last clash at the Asia Cup Qualifiers in Bangkok last year which Malaysia won by 22 runs.