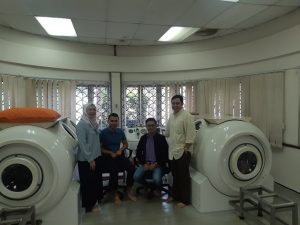 Hyperbaric chambers may be considered a non-standardised and at time a sceptical treatment within the medical society and the general public.

However, many of those who are sceptical about the science and the treatment are not educated in the untapped and at times life changing potential of hyperbaric chambers.

Hyperbaric chambers as stated by the Undersea and Hyperbaric Medical Society (UHMS) is, “an invention in which an individual breathes near-100% oxygen while inside a hyperbaric chamber that is pressurized to greater than sea level pressure”.

But what most do not understand is the key benefits this treatment can potentially have upon a patient and the potential risks which coincide along with it.

Rahmah Dato’ Shafee Program Director at Healing Chambers of Asia SDN BHD, stated “Although the research is not standardised globally the positive feedback from patients has been overwhelming”.

The positive effects as outlined by the UHMS include 14 various effective treatments towards illnesses and injuries such as, air or gas embolism, carbon monoxide poisoning, crush injuries and even common cases of diabetic ulcers.

Another key benefit of the hyperbaric chamber is the implication of the technology into training deep see divers and to prevent the risk of injury.

Courses in Diving medicine which have been established in by the DMAC have created key schemes and courses in diving medicine working along side with the EDTC medical subcommittee.

Furthermore, this utilization of hyperbaric chambers is not only limited to preventing the risk of a crisis as they are also primarily implemented within the post crisis aftermath.

In a recent study conducted by the NCBI on the treatment of hyperbaric chambers on carbon monoxide poisoned patients post crisis, the study found that “Approximately 1,500 CO-poisoned patients are treated with HBO2 in the US annually”.

The key benefits and opportunities to train and prevent risks with hyperbaric chambers has become apparent, furthermore its utilization within post crisis aftermath situations has been fundamental in containing a crisis and preventing further damage and harm due to the clear positive aspects behind the technology.