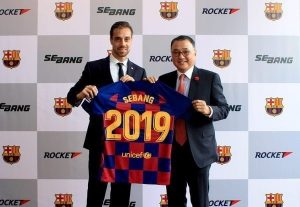 KUALA LUMPUR, Malaysia, Oct. 11, 2019 /PRNewswire/ — ‘Sebang Group’ is a Korean company that produces automobile and industrial batteries, and has ‘Rocket’ brand as a main product. Sebang recently signed a sponsorship deal with one of the world’s most popular football club, FC Barcelona, to boost brand recognition and sales in Malaysia.

The sponsorship agreement covers three countries including South Korea, Vietnam and Malaysia. The agreement will enable Sebang Malaysia to use the FC Barcelona’s brand assets, such as their logos and the player’s images. The partnership is also a good combination as the Korean battery products has shown increased sales in Malaysia and the country itself has shown great interest in football games. The sponsorship deal is expected to play an important role in increasing brand awareness and boosting the sales of ‘Rocket‘.

“We established the Sebang Malaysia joint-venture in 2016 to increase sales in the Southeast Asian market, and signed a sponsorship agreement with FC Barcelona, one of the world’s top sports clubs, in order to carry out local marketing activities in full scale. We will increase awareness of our battery products and boost sales volume in the Southeast Asia region by combining the recognition and likeability of the world’s best football club with the Rocket brand,” according to Taekjun Chung, Marketing Manager of Sebang Global Battery.

In addition to automotive batteries, Sebang Global Battery is selling batteries for golf carts, generators, uninterrupted power supply units and electric forklifts as well. The battery maker, is ranked first in Korea and fifth in the world, is marketing its automotive and industrial batteries to Malaysian consumers.

The company’s factory at Gwangju, South Korea, boasts the largest production capacity of any single facility in the world, producing over 17 million units of automotive batteries annually.

Sebang Global Battery, an affiliate company of Sebang Group, has ranked top in the local lead-acid battery market in Korea for over half a century since 1952, and has grown into one of the world’s top 10 battery manufacturers by exporting its products to more than 130 countries around the world. The company also established its position as an automotive battery brand by maintaining its top position in terms brand power for 11 years in a row since the K-BPI survey in 2009.