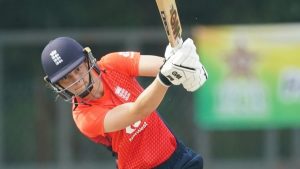 England still have a lot of work ahead of them, if their ambitions are serious of holding aloft the trophy on the 8th of March on International Women’s day in Australia.

England came out triumphant winners with a 29-run win over a resistant Pakistan outfit at the Kinara Oval in Kuala Lumpur.

England began today with a perfect start as wicket keeper Amy Jones hit a half century before being bowled by 15-year-old Aroob Shah. The major highlight for Pakistan heading in to the World Cup was Shah making her debut today, the sign of big things ahead for the Pakistan’s Women’s team.

This has vindicated Pakistan’s coach Iqbal Imam belief that the next generation of Pakistan’s future stars may change the fortunes of Pakistan’s success. A long with another diamond in the rough that was discovered with promising bowler Rameen Shamim who had taken major wickets in the ODI series.

Natalie Sciver continued her run of form after her century in the 2nd ODI with a consistent 34 not out. Whilst Tammy Beaumont made 30 supplementing to England’s total of 154 for 4. A target that was not out of the stretch of imagination for the Pakistan’s women’s team at the end of the first innings.

The vision of a win in front of Pakistan’s adoring fans in Kuala Lumpur was in serious disarray after only five balls with Nahida and Javeria Khan falling for a combined 0.

Pakistan’s captain Bismah Maroof was carrying the weight of a nation on her shoulders with her team on 1/2. Maroof and Sohail looked to rescue a sinking Pakistan ship forming a partnership of 46.

Until Sohail fell for 21 to Sophie Eccelstone who had taken 3 wickets on a spinners friendly pitch at the Kinara oval. Unfortunately, the Pakistan chase relied on partners to hang around with Maroof disappointingly for the fans in Karachi the loss of quick successive wickets of Dar, Javed and Riaz.

This spelled an end to any hopes of victory, with the final nail in the coffin when Shrubsole acquired that illusive wicket of Maroof for 60.

Pakistan can hold their heads held high that they created a real contest for England. In the back of new England coach Lisa Keightley mind she would be concerned that harder games will be a head with the next game on Thursday the 19th of December in Malaysia.